Why Make Things Complicated To Use?

Content Upgrades – A Smarter Way to Build Your Lists

Some Advice To Keep You Sane

Just to be clear, this may not work where you are in the world. Just saying. But there are workarounds…
Last Friday, we had a “family day out”.  We all piled in the car (including the dog) and buggered off for the whole day together.
It’s not something we do regularly. Often some of us can make it, but not all of us (studies, work, projects etc. get in the way). But, during the pandemic, it has largely been forbidden anyway.
We missed out on a family holiday we had booked for April as well. So, now our lockdown rules are relaxed a bit, we were all up for a day forgetting about everything, having some fun and just “being”.
We live in a place that attracts a lot of tourists. The towns around here swell in population during the summer months and, by now, there’s normally a fair bit of tourist activity going on. Nothing like July & August when it can get a bit crazy, but plenty of visitors nonetheless.
This year is very different.
It is how I imagine this area to be back before mass tourism was a thing. Which afforded us a unique opportunity…
We decided to go somewhere that is probably one of the most spectacularly beautiful beaches in the country, not easy to get to but is best avoided in summer. 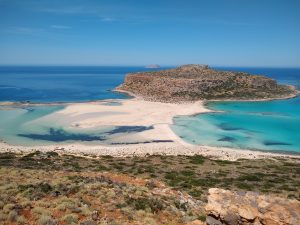 Normally, during the tourist season, large boats disgorge hundreds of excursioning tourists every day and many others attempt the 8km drive down an unpaved track followed by a 2km walk down the side of a mountain.
This bit of paradise is swamped by humanity. There are scant toilet facilities and, as it is formed by shallow lagoons, you can only guess on how many types of bacteria are swimming alongside you.
Our unique experience (for June) was to find only two other cars parked at the end of the track. We said hello to the goats (some under the two cars finding shade, one maverick goat on the roof of one of the cars) and made our way along the trail with just the humming of insects and birdsong in our ears.

As there are no tourists, the excursion boats are not operating and we found that there were less than a dozen people in the whole area where hundreds (sometimes thousands) would normally be.
There was no litter. There was no smell. No noise (apart from the sea gently lapping and the birdsong). There was no bluetooth speakers blasting shit pop music (although I did notice one guy about 300m away from us had an acoustic guitar with him). No suntan lotion or wee-wee in the sea. Paradise as it once was.
After a two or three hours of exploring, swimming, frisbee chucking and lazing, we walked back up the donkey path, drove to the nearest village and had a wonderful meal in one of our favourite tavernas.
What is the point of telling you this?
Sometimes, you have to FORCE yourself and the family to take a break. Escape the world with all of it’s shitty pandemics and protests.
Unplug completely for at least a day. Do it this week. Go on! Just do it.
Like this? Share it with others...