A Peek Into Charlie Wallace’s Funnel

What Do We Think Of The New Name For Content Samurai – Vidnami?

Hey… Shock announcement to start of 2020

No, I am not referring to the Royal Fam  or Brexit. It is even bigger news that either of those… 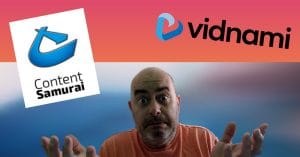 Noble Samurai has decided to rename and rebrand Content Samurai as “Vidnami”.

Yes, they are throwing away all of the branding work they have done in the past 6 or so years (and there has been a lot of that) and starting over building a new brand name.

Now, that is up to them but what do we think of the new name?

Personally, I don’t really like anything that references – or can allude to – things that kill a lot of people in product names.

You don’t name a product after a traffic accident or a chronic illness so what makes natural disasters OK?

Now I am sure that there will be some pedants that will say “Hang on, “nami” is just the Japanese word for wave. Nothing more than that”.

They have a point but I think the association that Vidnami will have for everyone who doesn’t speak the Japanese is tsunami.

The necessity to have to explain this is like the guy with a swastika tattooed on his face having to tell every prospective employer “Look, it’s an ancient good will symbol that was hijacked by Hitler – just like the paintbrush moustache I have as well”

The other reason I am not overly keen is it seems to lump it in with hundreds of really crap video products that have been badly developed, launched on JVZoo and quickly abandoned by the launch monkey tribe.

I also feel a bit sorry for the people who put loads of work into ranking for the keyword “Content Samurai Review” etc.

But why should it all matter?

The good news is that it doesn’t make any difference to the software itself. It is still, in my opinion, the best video creation tool out there.

And, they keep adding really cool things into it.

Last month, I saw something new when I logged in.  Something they call “influencer videos” (not influenza videos – I know that kills millions but they held themselves back).

These videos are a brilliant way to speak “to camera” and, inside Vidnami, you will be able to cut in any of the 800,000 video clips or images in your video.

I was so intrigued, I tried it out immediately.

I opened up Otter AI so I could record my voice as text as I made the video and that got uploaded as the subtitles. It took very little adjustment to make the video and this was the result…

Now, you can get a free trial of Vidnami and keep all the videos you make with it. They will also give you a VIP discount at the end of the trial so you don’t pay full price for it.

> Get the free trial here

So what are your thoughts on the new name? Add a comment below and let me know!

In common with almost every site on the net, this site uses cookies: Find out more.