What Do We Think Of The New Name For Content Samurai – Vidnami?

Earlier this week I released a new product. Although you probably knew that (say “yes”!).

A few minutes after it went live I was on a call with my pal Andie Brocklehurst. Just having a catch up, shooting the breeze and having a laugh. 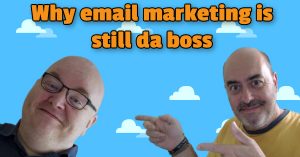 These days, if you have all your ducks in a row, a product can launch and go live without the need for drinking coffee and eating pizza. The people who are up all night and frazzled are the ones who are not prepared.

But that is a different story. I just want to highlight the power of email marketing long after everyone thinks it’s unfashionable and think snapchat or message bots are king.

A few minutes into the call Andie suddenly says “Hey, I think I forgot to set up an email for Faststart 9” (my new product). “No worries I’ll do it while we are chatting”

So. he logs into WarriorPlus, gets his link, shortens it with his tracking thingy and writes a quick email – really quick – telling people why they should grab it. And then clicks send.

This whole process took less than 5 minutes tops and we were still chatting about stuff while he was doing it.

I had told him who was getting the first sales and he hadn’t had a single one yet.

Then, suddenly, his face lit up “Got my first one!” He was on his way…

10 minutes later we had to close the call as there was a big storm and the power was flicking on and off at my end.

But by the time we got to that point, he had made over $70 in commissions.

Since then at the time of writing 2 days later, he is a whisker off a 4 figure promotion.

That, boys and girls, is the power of email. That is what you should be striving for. And here’s the big tip for today; it’s not just about building a list.

It’s about building a relationship.

Anyway, here is where you can get hold of Faststart9
>> Click here for the sales page

And >> here<< is where Andie lives online.